For those who want to see exactly what is going on in this trip video, read on!

Luke and Stephanie Hillier have a large family here in Virginia... But over the years, the size of their family has EXPLODED with the addition of the 60+ children and staff of Hogar de Fe. These semi annual family reunions serve to grow the Ignite family. Luke insists on bringing friends, family, and business acquaintances 3,000 miles away to meet his Nicaragua family .

The trips themselves are fully funded by Hillier Ignite, therefore the new Ignite Team member only need to worry about 2 simple things;

1. Bring your best, and leave it with the children

2. Fall in love with Nicaragua

This trip, was no different...

Day 1 saw the Ignite team arrive late afternoon. A quick turnaround was needed, as waiting at the hotel were the older college-aged kids of Hogar, eager to join the team for a surprise trip Luke had planned to the Masaya Volcano National Park. When the hugs and greetings were complete we piled on the bus along with the children and headed to an unforgettable experience.

From there it was time to return to the hotel for dinner for the whole group where the Ignite team received updates from both the administrators of Hogar De Fe, Pastor Romero Blandon and his son Isaac Blandon, along with the transition/university students.

Day 2 started out in a way very similar to how every trip starts out, but even the returning Ignite Team Members will admit, similar, but NEVER the same...

The bus ride to Hogar de Fe is usually fairly quiet, the new members usually wondering what to expect, and those returning, busting with anticipation and emotion... all let go the second the bus doors open...

Hugs and smiles galore! After a warm greeting the team continued on to a tour of the home, school, and computer center, followed by a short presentation of the staff additions and new children who had moved in since our last visit.

The team took part in a fun English speaking activity on the basketball court, followed by helping to teach the students computer class in the computer center.

We mentioned new children and staff members earlier, well next up, was one of the newest members of the staff. Yeriel de Jesus Aguirre Sanchez, is the new English teacher at Hogar a role this is so pivotal to the successful education of the kids. English as a second language is so important in Nicaragua, as jobs are limited there, the ones that prove most fruitful, are jobs for English speaking Nicaraguans.

Surprises are abound on our trips, but this new English teacher hit one out of the park! In just under 2 weeks time, he took his middle school aged class, and taught them a 20 min version of the classic Cinderella, 100% in English. He and all of us were very proud of performance the kids put on.

Although in the trip video, the dancing looks like all fun and games, let this be known, the music program at Hogar de Fe is one of it's crown jewels, and the band played a widest varsity of music, for the longest concert we have experienced! All the band members are students at Hogar, with special guest star Alfred Blanford, ORPHANetwork employee who serves all of our Hillier Ignite trips.

Make no mistake, we are having fun, dancing and carrying on like its the party of the year, but the amount of work these kids put into learning... shows in every note.

Day 3 The team and the kids met at Paseo Xolotlan Park, for an educational tour. The government built some monumental homes (Like Ruben Dario's house), the old Managua monuments before the earthquake. There guided tour taught us about these historic places. Midway through the tour, we tasked our own kids to serve as translators for the guides, to demonstrate the importance of their English studies.

The younger children headed home to Hogar, while the older kids and the Ignite Team took a detour to visit Pastor Guillermo Zuniga's church/feeding center in Nueva Vida.

We learned, that since our last visit to this church, Pastor Guillermo has done a little research on Hillier Ignite! As the pastor spoke to Luke, he talked of the help in the hurricane efforts, even the Virginia Beach Fitness Park, but mostly, the love he has for the youth of Nicaragua.

Pastor Guillermo took Luke inside the church to show him that he has been added to the churches "Sembradores del Reyno" which translated to Sowers of the Kingdom.

Together, the older students and the Ignite Team fed the children of Pastor Guillermo's community.

The team then broke off into two teams, one team departed to the home to rejoin the younger children for a carnival!

For the second team, it was back to work, to our World of Work exercise of this trip... this time taking place at the headquarters of Lafise Bank, one the the biggest banks in Nicaragua. Here the team and kids learned the history of the bank, heard about the inner functions of the bank from its directors, and a story of achievement from a young executive who came from similar roots as the kids.

It is a long standing tradition to have a water ballon fight with the kids on one of the days of the trip... This time, the kids decided on when that would take place. Upon returning to Hogar from the World of Work trip, the kids bombarded Luke with already filled water balloons, water guns, and buckets of water! Pastor Ramero in particular, was already ready for this battle with several ice cold buckets of water he had in the freezer... From there, the rest is history.

To close out day 3, Luke and Stephanie rewarded the 2nd year college students with new laptops to help them continue to be successful in their studies.

Day 4 was our fun day. The Ignite team brought all the children and the entire staff of Hogar de Fe to Apoyo Resort for a little fun in the sun. Kayaking, swimming, diving, stand up paddle boarding, games, and lunch on the banks of a beautiful volcano made lake, equipped with pools, was on the agenda today.

After a day at the lake, we close out the day, and the trip with our Fiesta. We returned to The Club House Restaurant, only this time, greeted by its new owner, Jaimie Sampson. Who had heard we were coming, and was excited to meet us. A native of Nicaragua, we soon learned Jaimie studied in New York City! She and her staff were eager to host our party at her newly renovated restaurant.

And as with all of our fiestas, they are full of smiles, dancing, pinatas, and love. As the bus pulled away, our hearts can't help but hurt, even with the tail lights still in sight. Until next time Nicaragua. 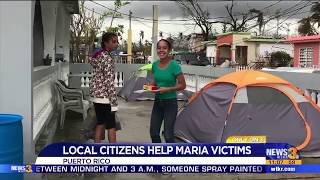 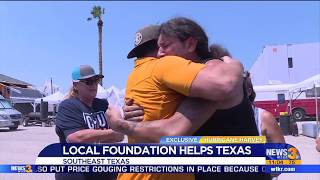 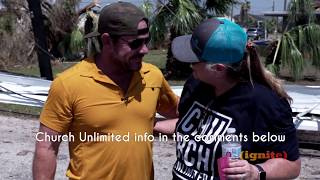 YOU CAN HELP HURRICANE HARVEY RELIEF EFFORT THROUGH CHURCH UNLIMITED

On the way to Texas